How To Support Mechanical Aeration

How to aerate the other 90% of the green that you miss by mechanical aeration.

There is an increasing need for greenkeepers to keep courses open all year-round, and one of the main obstacles stopping this is surface water on greens and fairways, which is often caused by the compaction of the root-zone over time.

Aeration of the root-zone is essential for better and more consistent playing surfaces. While traditional mechanical actions help, it's worth remembering that coring only targets around 3% of the root-zone with each pass.

Targeting this small percentage is a disruptive process that stops play on that chosen area, and with courses now year-round operations the chance to shut down through the main golf season seldom occurs.

Another option is the use of penetrant surfactants, or liquid aerators as they are sometimes referred to. Whilst they offer a much less invasive method of aeration their affect on the root-zone is often temporary.

Most root-zone penetrant surfactants were - and still are -  simple one action products that when applied, cause the clays and organic matter sitting within root-zone pore space to contract into tighter 'balls', thereby creating a pathway through the pore space for water drainage and natural in-flow aeration.

However, this action only lasts as long as the applied surfactant is sufficient, which could only be until the next rain or irrigation cycle, and would wash the surfactant out, allowing the clays and organic matter [OM] to de-contract and again obstruct water movement and natural aeration.

It was recognised that if we could combine a surfactant disruption of the clay and OM link, such that draining water would carry fine clays into the subsoil, with an increase in the indigenous OM consuming microbes and OM breakdown enzymes and bio acids, the result would be a more permanent clearance of the pore space, regardless of rain or irrigation depletion of the surfactant.

The starting point was in knowing that the digestion technologies we had developed at our composting facility produced refined microbial food proteins and attractants. And if applied with a suitable non-aggressive surfactant, would enable a 'bloom' in the indigenous microbe population, and from there we started to search out, combine and trial a number of organic and bio-chemical penetrant surfactants. 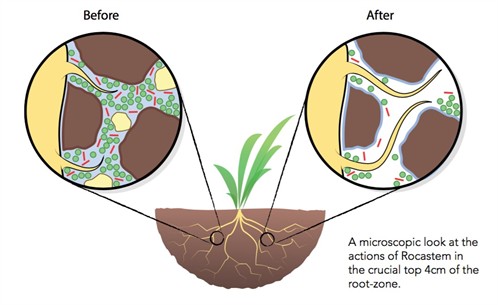 This was done until we found a combination that was efficient in breaking the clay/OM link and non-aggressive to either new roots or microbe populations. Once achieved, we added bio acid root hair stimulants and OM breakdown enzymes to the package, resulting in a unique two-part product, as it was necessary to keep the enzymes apart from the proteins until application, to avoid fermentation arising in the bottle.

The culmination of this process resulted in Rocastem, which consists of four main actions; separation, dispersal, percolation and root hair boost, when combined these four aspects provide an unrivalled effect on the root-zone.

The cascade of events starts with the electrostatic action of Rocastem, to flocculate the soil particles by increasing the ionic [-] charge within the profile, causing the clay/OM link to let go, which reduces compaction by letting water escape and taking the fine clay particles with it. 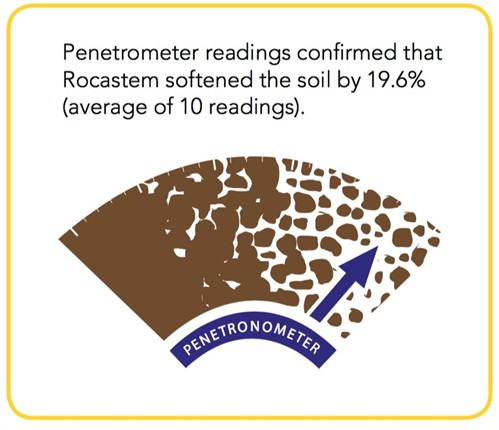 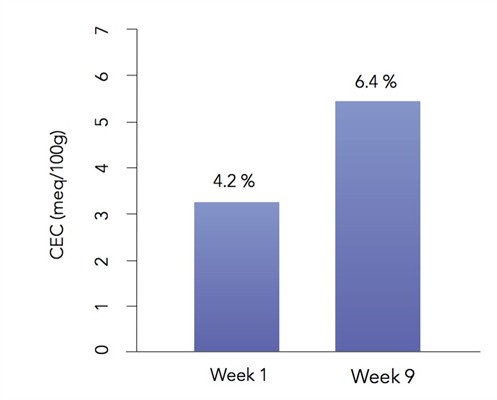 Indigenous bacteria then consume organic matter and very fine particles are free to drain down through the profile, thanks to the microscopic pathways made by the separation action. Organic acids, carbohydrates and more air stimulate the root hairs and trigger plant vigour, completing the cycle.

By targeting these areas in such a way Rocastem works at microscopic level to hit and help the 90% of the root-zone you won't get mechanically, adding real value to all your mechanical aeration activities throughout the year.