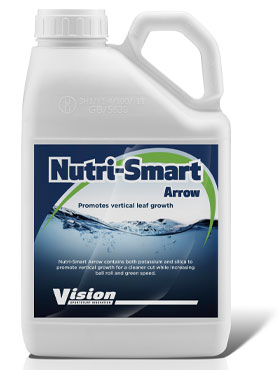 A liquid containing both potassium and silica to promote vertical growth for a cleaner cut while increasing ball role and green speed.

Arrow is a vital component in turf nutrient programmes. It accumulates in the leaf and will strengthen cell walls, toughen epidermal cells, regulate stomata function and boosts the plants natural disease defence. This will also leadto an increase in chlorophyll content and help improve the plant photosynthesis and colour. It also allows the plant to utilise both higher and lower light levels, when applied in the early and late seasons.

The silica will also promote vertical groeth and the leaf will stand up. This can be particularly useful when stalks and seed heads are present as it will allow them to be cut off easier giving a better appearance. When the blades are vertical this also allows for a more uniform surface and faster green speeds due to less leaf friction.

A potassium silicate formulation which is designed to promote vertical growth, improve the plant health and wear tolerance. Silicon is depoisted in the leaf cells, cell walls and cuticles ahich will result in a more erect and thicker leaf blade. This will make the removal of annual meadow grass seed heads easier when mowing by standing the seed heads upright. The upright growth resulting from an application will promote faster green speeds. Silicon will result in higher concentrations of chlorophyll in the leaf tissue, allowing the plant to utilise both higher and lower light levels, when applied in the early and late seasons.﻿